Have you heard the story of a newborn babe placed in a protected container and sent away to escape destruction, after which he is adopted by a people not his own?

You got it. It’s the story of Superman… and Moses.

You can thank me later for the Cecil B. DeMille cheesy awesomeness. 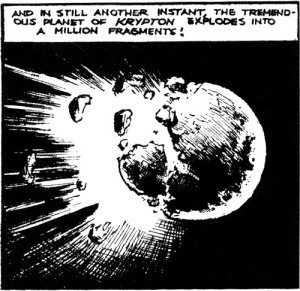 In the Judeo-Christian tradition, there are many aspects to Moses that have been celebrated in the last four millennia: law-bringer, chosen one, and mouthpiece of God’s word, to name a few. He brought salvation to the people of God after 400 years of slavery, and led them to the promised land after forty years of tribulation in the wilderness. Along the way he brought Israel a new law, most famously the Ten Commandments, but also extensive instruction to the Israelites on how to live life- what has become known as the Mosaic Law. He also worked miracles through the staff which God had blessed, caused manna to fall from the sky, and on a number of occasions, literally communicated face-to-face with God (well, with the back of God’s head, anyway- see Exodus 33:18-23). Not bad for a refugee baby turned prince turned shepherd turned prophet.

Because of all he did, Moses is celebrated as THE law-bringer for the people of God in the Jewish tradition. While THE Messiah, the one who was to restore Israel to glory, was prophesied extensively in the Old Testament, Moses remains the most prominent icon in the Jewish faith until the coming of God’s Anointed One. As mentioned in Part 2, it was this context which inspired Jerry Siegel to give his super-man Messianic, yes, but Moses-like qualities, not Christ-like (more on that next chapter). While the basket/rocket ship metaphor is subtly, but firmly grounded in Jewish tradition, it also came to be a metaphor for something else in early 20th century America: the ultimate immigrant story. 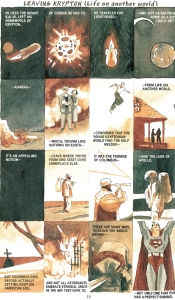 Not only is the character of Superman the story of a law-bringer coming to right wrongs, but also the ultimate story of a transplant to another culture: the frustration of not quite fitting in, the differences in one’s makeup as a person, but nevertheless the hope of living in a land of promise. Is it any wonder that the character of Superman has become Americana? Despite “Man of Steel’s” shortcomings in conveying the Superman mythos (as mentioned in Parts 1 and 2 of this series), it did nonetheless contain a few touching scenes with his adopted father, played by Kevin Costner, about “fitting in,” which did a decent job of acknowledging the immigrant metaphor. The main reason, however, that the film glossed over Moses metaphors, as most Superman adaptations tend to do these days, I think, is because writers who followed Siegel interpreted the Messianic metaphors of the Superman story as metaphors for Christ. Although not the original intent, there have been several wonderful stories and imageries about the story of the world’s most famous Messiah.

“When the child grew older, she took him to Pharaoh’s daughter and he became her son. She named him Moses, saying, ‘I drew him out of the water.’” (Exodus 2:10)