One of the coolest stories of the Old Testament is that of Daniel in the lions’ den. The thought of a cave filled with starving, vicious, man-eating beasts surrounding, but not touching, a human being is absolutely incredible. The Persian Empire, the ruling power of Daniel’s time, reserved this punishment for criminals to send a message to all who opposed their rule. Yet Scripture tells us that Daniel came out of the cave with “no injury whatever found on him because he believed in his God.” (Daniel 6:23) The thought of God taming wild animals is striking, and a common theme which arises from such stories. Truly, all creation knows who its Master is. 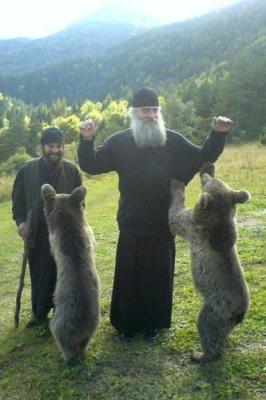 The last few months I’ve been reading a book called The Spiritual Meadow, a 6th century collection of anecdotes and sayings of Christian monastics in the Middle East. Among the many enjoyable stories found in the book are run-ins monks had with creatures living in the wilderness. For every snake or bug bite that may have occurred, it seems there were just as many encounters of holy men living among wild creatures, unharmed. Saint Gerasimos of the Jordan, who tamed a lion after taking a thorn out of its paw, is probably the most famous example.  Others include:

– An elder “whose virtue was so great that he would welcome the lions which came into his cave and feed them at his lap” (p.5)

– A deer patting its hoof before two monks to reveal the location of a long dead brother (p.68)

– Two monks, dressed in antelope skins, reviving a monk dead by snake bite and then killing the snake (p.101-102)

– A monk convincing a lion to leave the mule stables of the monastery by giving it antidoron (p.102) 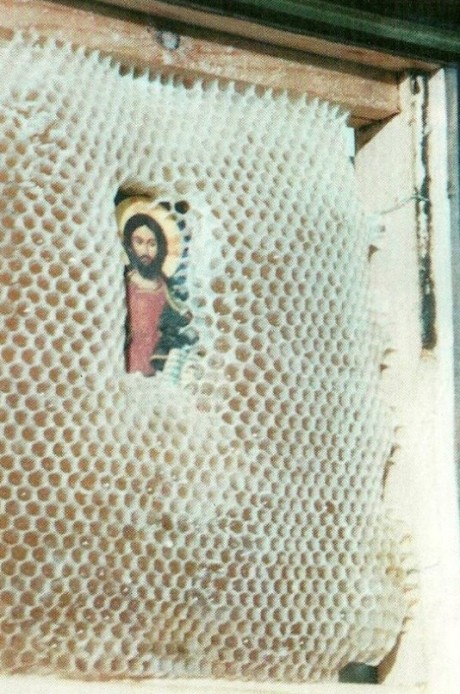 Such stories exist in other eras as well.  One reads of early Christian saints who were thrown into the arena to be devoured by wild animals but remained unharmed, just like Daniel.   Images of bees tracing an image of Christ, the Mother of God and others on icons while building their hives today have gone viral on Orthodox social media pages in years past.  Perhaps most famously, Saint Seraphim of Sarov (late 18th/early 19th century) befriended many animals while living in the wilderness but most famously a bear.  In a spirit consistent with the stories of the desert, we read the following story of Saint Seraphim:

“Two nuns from a certain convent once came to visit Saint Seraphim. Suddenly a bear lumbered unexpectedly out of the woods and frightened the visitors with his appearance.
‘Misha,’ – said the saint, – ‘why do you frighten the poor orphans! Go back and bring us a treat, otherwise I have nothing to offer to my guests.’ Hearing these words, the bear went back into the woods, and two hours later he tumbled into the holy elder’s cell and gave him something covered with leaves. It was a fresh honeycomb of purest honey. Father Seraphim took a piece of bread from his bag, gave it to the bear, pointed to the door – and the bear left immediately.” 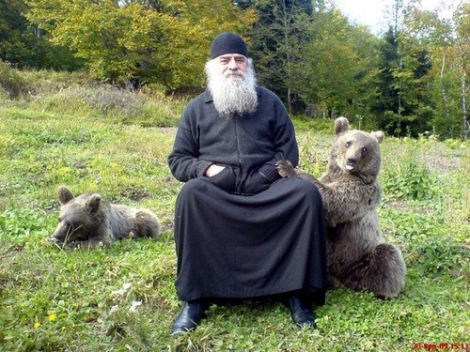 Before going any further, I should note that in Orthodox theology, animals are certainly a valued part of God’s creation, and like everything else created, man is called to be a responsible steward of them, but they do not have a soul, at least, not like we do.  I think it is summarized best by the Fathers of the desert who said, with regards to Saint Gerasimos’ lion: “This did not take place because the lion had a rational soul, but because it is the will of God to glorify those who glorify Him…”  How all this fits together, and how creation will look after the Second Coming, we do not know, but we do know that animals, like everything else on earth, are subject to God and have been redeemed through the Lord’s Incarnation.

In the years prior to the premiere of the “superhero” as we know it, pop culture was full of all kinds of costumed (or not) heroes whose “power,” was mastery over creation, including animals.  Due to my disillusionment in recent years with the “Big Two,” I’ve found myself lately reading about such fictional, pre-DC/Marvel heroes, and I’m shocked by how big this trope was.  As obscure as he may seem today, comparatively speaking, the popularity of Tarzan of the Apes was massive in the first half of the 20th century.  Edgar Rice Burroughs’ most famous creation, the human who is raised in the jungle and can seemingly control any beast he encounters, was featured in 24 novels written by Burroughs himself, over 50 movies, newspaper comics and so much more.  So wild was the public for Tarzan stories that the part of Southern California which Burroughs purchased as his estate is now an incorporated, honest to goodness real city named (wait for it…) Tarzana. 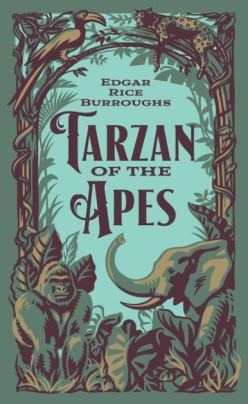 Tarzan wasn’t the only one.  The Phantom, credited by some as the first ever costumed hero, lived in the deep woods and had a pet wolf.  Tarzan knockoffs ensued, and stories based in the jungle and about heroes who could master animals were a dime a dozen.  You could even go further back and argue that the myths of ancient Greece and Rome had similar themes- Heracles’ twelve labors come to mind, as does the story of Romulus and Remus, the mythical founders of Rome, who were suckled by a wolf.  Similar heroes exist today as well, most notably Aquaman, who can control all sea life and was featured in a billion dollar movie two years ago.

Clearly, human beings love stories about taming nature.  Subduing that which we fear might have something to do with this, and I’m sure much more.  There is a major appeal to idealizing power and strength by controlling the uncontrollable, being mightier than the mighty, and taming the untamable.

And, amidst all of these feats and literary fads, we see that God is already doing all of this. 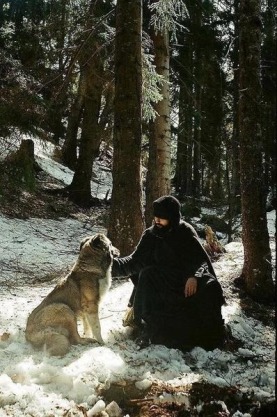 It is amazing to me how the Creator sometimes sends little messages about His omnipotence in very visceral ways.  God already controls all that we see and is mightier than all of nature and all that which we fear!  He demonstrates it in beloved saint stories like those mentioned above, which quite frankly aren’t that different from the fictional stories we read.  Burroughs’ writings may be a worldwide phenomenon for all the reasons that we find tales of desert monks and their animal companions captivating.  To take this one step further, we see here that, once again, comics and pop culture can reflect that which goes on inside us, including our innermost fears and dreams.

Some food for thought.

“One day a nun from the nearby convent of Diveyevo, coming to visit St. Seraphim at his hermitage in the woods near Sarov, found the old monk being visited by a bear. Terrified, the nun let out a scream. The staretz responded by patting the bear and sending it away, but when the nun came to sit beside the elder, the bear returned and lay down by Seraphim’s feet. ‘I was as terrified as before,’ the nun later recorded, ‘but when I saw Father Seraphim, quite unconcerned, treating the bear like a lamb, stroking him and giving him bread, I calmed down.’ Her fear left her entirely'” 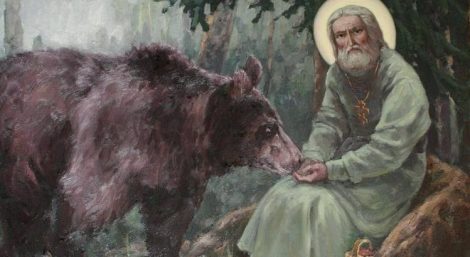