Hello all!  Below I’m posting the audio and transcript of a sermon I offered at my parish last October 7, 2018.  The topic is hope, which of course lends itself perfectly to a certain Kryptonian we all know and love.  Since I couldn’t resist, I incorporated talking about a certain scene from 2013’s “Man of Steel” in the sermon, which in itself lends itself to this blog. Enjoy!

The last month, a story I’ve been following with much interest… and perhaps others have, although I doubt it… is the contract negotiations between Warner Bros. and Henry Cavill.

For those of us who may not know, Henry Cavill, who starred in this last Mission: Impossible movie this last summer, also has been the actor who has portrayed Superman in the last three movies [featuring that character].  I am not going into that right now, although I could.  I think he is a fantastic actor in that role to play that character, and I think there’s some potential there.  I’m hoping that the latest story which came out is not true, in that they were negotiating and have now parted ways, and the studio has said they are now looking for a different actor to play the character.  We’ll see what happens, we can only hope.

In one of the recent movies that came out- Man of Steel, which came out in 2013- there were some interesting quotes in there, and one in particular that I wanted to bring up today, one which was very important for us, and important for the scripture reading today.  There is a scene where Superman is sitting at a table and is being interrogated by the government.  Lois Lane walks in, and they have met for the first time.  She looks at him, and the first thing she says is, “What’s the ‘S’ stand for?”  And he says, “Actually, it’s not an ‘S.’  On my world, this means ‘hope.’”  And she responds by saying, “Where I’m standing, it’s still an ‘S.’”

This is very interesting!  Are there ever times in our lives, I wonder, where we look at something perhaps, and the Lord, perhaps, is explaining to us, “This is not what it looks like.”  And our response is, “Well, you know, from where I’m standing, it still looks like this.”  Are there ever times in our lives where we see a situation that looks hope-less, only to have the Lord Himself say to us, “Look a little closer, look a little more closely.  This is not what it seems, at first.  There is hope here.”  And our response might be, “Well, Lord, where I’m standing, it still looks hopeless.”  Or, “I don’t see a symbol for hope there.”  Whatever the situation in our life might be.

Are there ever times where we find ourselves in a situation like this?  Are there ever times where we do see something that may look one way at first, and we jump to a conclusion, only to be told that it’s something else, but we may still not see it that way?  We may need it explained a little further, because at first glance it may not seem like what it appears to be. 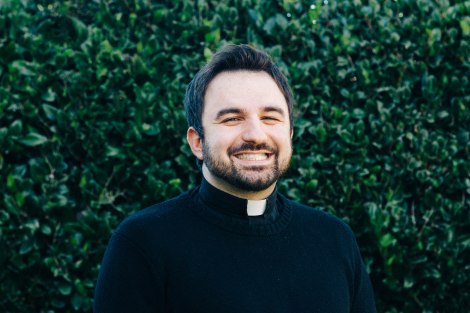 In today’s gospel reading, there is a similar situation.  There’s a moment where Jesus is approaching a city.  And there are people coming out of the city.  And what does Jesus see but a young man who has passed away, lying dead on a pallet, being carried out of the city, likely to be buried (because, I’m inclined to think, they buried their dead outside the city, not in the city).  When we see a widow whose husband has passed away, and now whose son has passed away, in the ancient world this meant that she had no one to look after her.  It kind of hearkens back to the story of Elijah, who lived with a widow whose son passed away, and who Elijah raised from the dead by invoking God’s name.

In any case, we see here a situation that doesn’t get any more hopeless!  There is nothing more “hopeless,” if you will, than a dead body!  There is nothing else!  There is nothing after that (according to human logic, of course!).  Jesus approaches the city and everyone says “This is hopeless.”  And they are reacting.  They are giving emotion as such.  They see the dead body, and they see this man come up who says “Do not weep.”  What might their reaction have been?  Could it be that the Lord Himself was saying, “This is not what it seems?  There is hope here?”  Could it also be possible that those who were in the crowd responded with “Well, Lord, where we’re standing… I mean, look!”  Is it possible that anyone reacted that way?  I would say it is not only possible, but it is likely.  This was a human reaction.

“Look!  There is no hope here!  This is not a symbol of hope, this is a dead body!  There’s no way that hope can come out of this situation!  Look at the mother who’s crying here!  And her son, the only person to take care of her, has left her.”  But Jesus, undeterred, says “No, there is a symbol of hope here.”  And walking over to the body, He says, ‘Young man, arise.”  And he doesn’t even stop there!  He even, after the young man arises, the passage says, takes him to his mother!  Imagine.  Just imagine.  Someone being raised from the dead by someone else, and then being walked… being led by the hand over to the mother.  The Lord didn’t say this with words, but what He was saying was, in essence, with this miracle was “See, there is hope!”

Even when we do not see hope, my brothers and sisters, even when a situation might look hopeless, or negative, or a crisis, or an emergency or anything that might seem without hope, the Lord says, “Actually, there is.”  Unfortunately, we often as human beings run the risk, and fall into the trap of saying “No, it’s not!”  And respond back to God and say, “Lord, I understand You are the sovereign of the universe, I understand that you can do all things but, at the end of the day, it’s still hopeless.  There’s nothing that can be done here.”  And the Lord’s response to us is, “Are you sure?  Are you sure about that?  Do you think to know better than Me, if a situation has hope or not?”  It’s a very interesting conversation.

In a way, this miracle encapsulates Jesus’ entire message.  He did not come to earth to right every wrong, although that would have been nice.  That’s going to come at the Second Coming.  He came to earth to make the dead, alive.  He came to earth to give hope where there was none.  And He comes to earth to give us hope where there is, seemingly, no hope.  It is a beautiful affirmation of the Lord’s love for us, because He offers this to every single human being who believes in Him, and in our lives, as well.  I’ve said this before in sermons, and it’s a quote I really, really love.  It’s something to consider in passages like this: “Do not put a period, where God has put a comma.”  Do not put a period, a finality, where God has said, “Pause.  Just pause.”

In the movie Man of Steel, Lois Lane did not recognize a symbol for hope, and she had to [have it explained to her].  There are times where we, too, don’t exactly understand what we’re looking at.  But the story doesn’t end there.  If we allow the Lord to explain to us- with an open mind, and more importantly, with an open heart- we, too, will see that in actuality there is a great deal of hope in our lives.

For us as Christians, we know that hope exists.  We know that nothing is hopeless!  That is an affirmation of the Christian faith to say that there is hope, where seemingly there is none.  But sometimes, we need it explained to us.  Let us open our hearts and our minds for the Lord to explain it to us, to have Him say, “No, this is not what it seems.”  It is a symbol of hope, and it is available to you, and to me, and to anyone who calls upon the name of the Lord.  Let us embrace the hope that the Lord offers us every day of our lives.