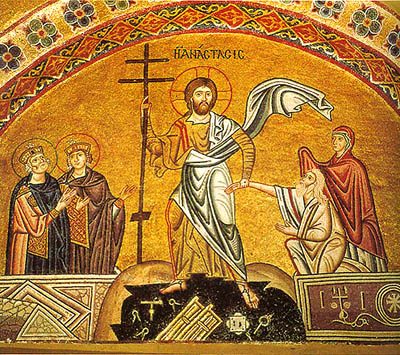 “When You descended into death, O Immortal Life, then You made Hades dead with the lightning of Your divinity.  When You raised the dead from the depths of darkness, all the heavenly powers cried out, ‘Glory to You O Christ, the Giver of Life.’”

I’ve been writing about superheroes for a long time now, and it occurred to me that this month, I should take a different approach and, appropriately for the season, talk a little bit about the Superhero of Superheroes, superpowers and all!

Every year during Orthodox Holy Week, amidst the candles, the hymns, the subdued lighting, the entrances and exits, the processions, the pageantry, the Passion and Resurrection, I find myself always thinking that there is no other place on earth I’d rather be.  It probably started when I used to serve in the altar as a boy, which I loved a great deal.  Despite going to a Catholic school from K-8th grade and having many Protestant friends in high school and college, Holy Week in the Orthodox Church was always my anchor to who I was as a Christian.  There really is nothing else like it.

If you’ve never been and you get a chance, by all means, go see one!  You won’t regret it.

The week culminates in the triumphal Anastasis service on Holy Saturday night, when the church goes from pitch black to illuminated by lit candles held by all the faithful, who triumphantly exclaim “Christ is Risen!” and chant the Paschal apolytikion several times.  The Divine Liturgy follows, decorated beautifully by the theme of the Resurrection.  It’s absolutely soul-filling and an incredible experience, and it is done every year.

For Orthodox Christians, the Resurrection could not be celebrated any less gloriously.  To do so would be compromising, at least to some degree, the celebration of the magnitude of the Feast of Feasts.  If we do acknowledge that what Jesus came and did for us is the greatest victory the world has ever known, then truly nothing less would do.  The kontakion of the feast, also chanted that evening, sums up the victory magnificently:

“Though You went down into the tomb, You destroyed Hades’ power and rose the Victor, Christ God.  To the myrrh-bearing women saying ‘Rejoice!’ and granting peace to Your apostles, You are He Who raises up the fallen.  Glory to You.”

Hymns like this one are sprinkled throughout Orthodox liturgical tradition, both during the Pascha season and during the whole year.  The Resurrection is celebrated continuously, and really, why shouldn’t it?  We celebrate the life-saving, history-altering event that is unparalleled in all of human history: the destruction, the very death of death itself.

Would it be safe to say that, given the nature of this incredible victory, and how great an event it was, how great a sacrifice it was for God Himself, that there is a “heroic” quality to it?

Jesus agonized in the garden before offering Himself up to be killed, knowing all along what would be accomplished and yet feeling that sacrifice right up to being on the Cross itself (Matt 27:46).  He exhibited bravery, selflessness, unconditional love, and firm conviction.  The words used to describe the Resurrection are often “hope,” “victory,” “glory,” and many other such terms.  Jesus Christ changed the course of human history.  Where there once was the greatest symbol of death in the Roman world, now stands the greatest symbol of victory and of love in all the world.  “Heroic” absolutely applies here.

A wonderful priest in Springfield, Massachusetts once said that Jesus Christ was the greatest superhero of all time.  He was right.

The Lord came to save us.  He did not come to save all of us, He came to save each of us “from the maw of Hades” and destruction, the clutches of sin and death.  As much as we love similar stories about saviors saving us from destruction and death, nothing even comes close to this ultimate example of victory, of this archetypal superhero Himself.

As great and wonderful as this story is though, it’s the ending that’s even better, that being that all of us are the beneficiaries of this love and this victory over death.  God does not discriminate who gets to be saved and who doesn’t, that choice is up to us.  He desires that “all be saved and come to the knowledge of the truth.” (1 Tim 2:4)  Like a mother hen gathering up her chicks, or like any parent sacrificing themselves for their children, God loves us as much and then some.  We have the privilege of availing ourselves of this love and victory by believing in it.  By fleeing to the Savior, we are saved ourselves and feel this incredible love and all that came to pass for each of us.

May we all live with this hope in the forefront of our minds and hearts, always and forever.

God bless you.  Christ is Risen!

“We are representatives of life’s most important message.” – David Kinnaman

One response to ““O Death, Where is Thy Sting?””