Father Niko: Switching gears a little bit, and you’ve seen this happening more closely than we have, we are living in a golden age of comic book properties in movies, spilling into the silver screen, the small screen, etc. Do you have a favorite comic book movie or TV show?

B: If there is anyone doing it right on the the small screen, it’s the mini-DC Universe of Arrow and The Flash. They’re engaging modern television audience sensibilities, while at the same time you can tell there is such a love and respect for the body of work those characters represent. They are taking decades worth of who Green Arrow is and all the various eras of Green Arrow and distilling them down to this television version of Ollie. Also, I’ve heard this suggested elsewhere so I’m not just stating this myself, Flash has been described as the “perfect comic book translation,” the most successful actor-driven version adapting a comic book property. It has that feel like when you’re a kid—ah, let me switch gears a little bit. Comic books are not a genre. “Superheroes” are the genre most associated with comics. Just felt I had to amend that. I have many, many colleagues who blow a gasket if you say otherwise around them. 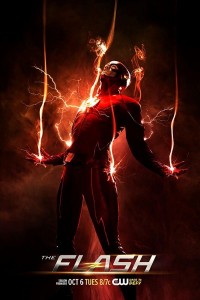 FN: Neil Gaiman most famously said that too, I believe- that comic books are not a genre, they are a medium. The superhero genre is, as you said, the most associated.

B: So I correct myself: I feel the magic of superhero comic books specifically on television is best represented by The Flash. It’s wonderful, it’s fun, and now they’re developing their own universe with the crossovers. There’s going to be a third spinoff show, and I’ve heard speculation that, because the same producers are involved, the new Supergirl series on CBS, even though it’s on a completely different network, there’s a chance that they may be looking, when sweeps week rolls around, that that’s in the same universe even though it’s on a different network. I have no confirmation of that, but I’ve heard that whispered behind the scenes and I’m really hoping it turns out to be true. That would be on the small screen the closest thing we have to one of these franchise comic book universes.

FN: Is there anything you can tell us about if any of your stories are being considered for Hollywood treatment?

B: Well, I cannot give any specifics whatsoever, but I can say we have recently signed an option deal with someone for one property, and we’re very fascinated to see where the development of that is going. There’s another for which I’ve been contacted by my agent to adapt into a pilot script with the purpose of shopping that property to a studio or to garner the attention of a producer or production house.

B: Thank you. I’ve had numerous options signed over the last ten years, and none of them previously have gone beyond the option deal, but all I can say is what’s happening now is a little bit bigger than that, and we’re kind of excited.

FN: Awesome, I hope it goes well for you. Last question: do you drink coffee and do you have any favorites?

B: I definitely drink coffee. My wife turned me into a coffee drinker, I was not before I met her eighteen years ago (that’s incredible!). As far as a favorite goes, sadly, I’ll drink whatever is put in front of me.

FN: I’ve become such a coffee snob being in San Francisco that I can’t even do church coffee anymore. At coffee hour on Sunday I basically tell everyone “I’m going to have a cookie, I’ll say hi to everyone, and then I’m going to go get my coffee somewhere else.”

FN: Bryan, it has been really wonderful to interview you. I feel like we’ve known each other a long time now, and I appreciate you discovering the blog! It was such a thrill to me to see a comic book writer, who happens to be Orthodox, which is really cool, take the time to find my page, like my page and take the time to do an interview. I’m sure you’re very busy, so I really appreciate your enthusiasm and greatly appreciate the time. So thank you very much.