At least, that’s probably what you’re thinking when you see a blog post with the words “diversity” and “comics” in the title. I can’t say I blame you, either, as this seems to be a topic these days that is bopping everyone over the head, important though it may be.

If you wouldn’t mind bearing with me to offer my two cents on the topic (thanks!), it is a fact that the entertainment industry as a whole was prejudice towards minorities of all kinds in its early years, and has been making strides over time to more accurately represent those who enjoy their offerings. While the 1950s-1960s saw only squeaky-clean white superheroes in comic books, an Arab Green Lantern, a Muslim Ms. Marvel, more than one same-sex relationship and (gasp!) female writers for Wonder Woman have been showcased in pages nowadays. Though there was once a time when any female protagonist was little (if at all) more than a damsel in distress, now Twitter explodes in a massive uproar when the Avengers’ only female member has to be rescued in one scene in the latest Marvel Studios movie (a ridiculous reaction, frankly, given Joss Whedon’s track record of strong female leads, but I digress). The reality is that as the planet hastens towards its new identity of the oft-coined “global village,” people of all types are enjoying superhero stories and wanting to identify more and more closely with their heroes, a reality which the industry is rapidly trying to catch up to.

But rather than turn this article into yet another call for diversity in comic books and their adaptations (the aforementioned “here we go again”), I wanted to point out one particular achievement in the history of the medium instead, one which I have no idea why is not mentioned more often, especially today. 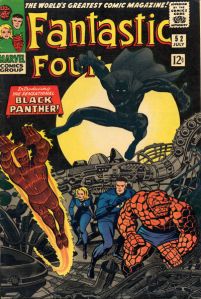 If you were an African-American in entertainment during or before the 1960s, more often than not you were depicted as Prissy, not Mammy, from Gone with the Wind. If you were an African, well… even less flattering. In July 1966, when the time came for the Fantastic Four, Marvel Comics’ flagship title of the 1960s and self-proclaimed “World’s Greatest Comic Magazine,” to head to Africa for their next thrilling adventure, what they encountered was not the clichéd sub-human savages with spears and clubs trying to attack them. Quite the contrary, in fact.

Playing completely against type, Stan Lee and Jack Kirby created a character who was phenomenally intelligent, extremely well-educated, a skilled fighter and every bit a hero as any other in Marvel’s stable. King of the fictional African nation of Wakanda, T’Challa, aka the Black Panther, would dawn the garb of the iconic animal of the same name to protect his people and honor the memory of his father (months before the creation of the political activist group of said name, it should be noted). With his intellect, super agility and strength, the character eventually became allies with the FF, a representative to the United Nations, and joined the Avengers. Interestingly, the Black Panther was much different from the wave of minority heroes that sprang up in the decade that followed his first appearance- Luke Cage, Falcon, Green Lantern (John Stewart), to name a few- almost all of whom were stereotypically written as having come from the ghetto of one big city or another.

A powerful, ultra-intelligent, wealthy, black superhero.  I ask again- why is this not mentioned more often?

By the same token, you might say that the character was African and therefore still a stereotype. At first glance, maybe so, but I disagree. The fact that Lee and Kirby even attempted such a diverse hero not even a year after the Voting Rights Act of 1965- neither because of editorial mandate nor a deliberate attempt at diversification (at least as far as we know)- should be praised. The folks at Marvel Studios seem to agree, as a Black Panther film is currently slated for release in 2018. Despite Ava DuVernay (Selma) declining to direct the film, the mere fact that she was asked indicates serious consideration is being given to this groundbreaking superhero, as well it should.

The issue of diversity was really an issue of equality when the Black Panther was first created. Like Star Trek’s completely racially diversified cast (one of the few shows Reverend and Mrs. King allowed their children to watch), there was a deliberate effort made to break the mold and rethink aspects of pop culture of the 1960s. As a priest, I can appreciate this a great deal, especially if it pushed children (or adults) who read the books to reexamine the impressions of their day. In today’s similar, yet very different climate of fans clamoring for more diversity amongst superheroes and a more accurate representation of today’s world, I think it’s important to pause for a moment to appreciate what has taken place along the way.

Regardless of which aspects of this conversation one agrees or disagrees with, I’d like to believe that people of all types can identify with and draw inspiration from this character, including myself. Ultimately, isn’t that what superheroes are all about?