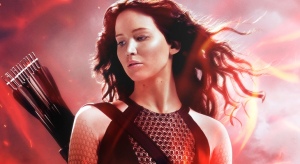 I owe my wife a lot.

A few years ago we had a conversation that basically went like this:

Wife: “That new movie ‘Hunger Games’ is listed on Netflix now. I ordered it for us and should be coming this week.” Me: “The teen movie? Why’d you do that? I don’t want to see a teen movie.” Wife: “It’s popular with the kids in our youth group, so you should watch it.” 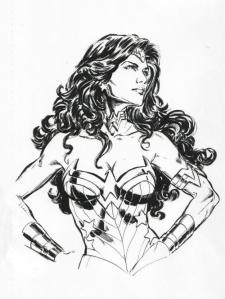 She talked me into it. I watched the first Hunger Games two years ago. Then the second. Then the third last week. Now I, as well as the teens in our parish, love Hunger Games. Don’t worry, I’ve already admitted to her that she was right. I’ve had plenty of practice, since she usually is.

As you can probably tell, I’ve never gravitated towards movies that have kids or teens as the main characters. Even when I was a kid, I always found grown-up heroes to be much more interesting. Until Hunger Games. For whatever reason, I have become invested in Katniss Everdeen’s adventures, in large part because her character is something rare in movie franchises- a strong female lead.

The platitera icon in the apse of Hagia Sophia, the largest church ever built (present day Istanbul)

As any parent, teacher, or high school counselor can tell you, young girls need role models, perhaps today more than ever. It’s so important that girls know that they are special, valuable, unique, strong, and not objects. I recently read that, even with regards to world religions, there is a notable absence of female religious figures- one of the strengths of Christianity, with strong females in the Bible and saint stories, and, in many churches, the veneration of the Mother of God.  The Orthodox Church, in particular, proclaims her to be a role model for all humanity, both men and women. Female role models are very important.

Since 1940, there have been only three comic book characters published on an uninterrupted, monthly basis. The first two, both male, are probably known to you whether you’re a fan or not. Ironically, the third one probably is too, even though you see far less of her.

In the last ten years alone, Batman and Superman, collectively, have had five movies released and countless hours of live-action television on Smallville and Gotham. Our third character, also a famous superhero, has had zero of both after failed attempts at television and film. Warner Bros.’ latest solution is to include her in the Batman vs. Superman film coming next year, although the jury is out as to how well she’ll be represented.

Do you ever wonder what it would be like if the pop culture powers-that-be knew what to do with Wonder Woman?

Spun out of Greek mythology, Wonder Woman is an Amazon princess who journeys into “Man’s World” to become an ambassador for peace. Originally, she was fashioned out of clay by the Olympian gods as a gift to the queen of the Amazons. Armed with the lasso of truth, flight, and other superpowers, she balances her role as peacemaker with her warrior roots while doing her best to live in a world she’s not completely part of, one in which most positions of leadership are occupied by men.

She is the most popular superheroine in all of comicdom, despite being one of the very few female headlined books in a male-driven market (3 out of 4 comic book readers are male). Unfortunately, her success on the page has not translated to the screen. Outside of Lynda Carter’s brief but iconic TV show in the 1970s, and numerous appearances on various animated series, Wonder Woman has been as invisible as her jet.

Since special effects reached a point where serious, live action movies can be made about superheroes, how many have been made about a superheroine? Not many, and the ones that have been made… well, I’ll leave it to you to tell me what you thought of “Elektra” and “Catwoman.”

What I love most about superhero stories are not just their cool powers or real problems but the ideal that they represent. Girls today need good role models. Wonder Woman can absolutely be that, much in the same way that Jennifer Lawrence has become that. Everyone should have something they aspire to, an ideal to look up to.

Wonder Woman is NOT the female version of Superman, but something different. Despite her costume’s appearance, she is not a sex symbol, either, as many lead characters- male and female- are depicted, as her character is celibate. Capable, while still maternal; strong while not laughably over-aggressive. In short, a great role model, if done properly.  I have always appreciated and respected the character of Wonder Woman, as I now appreciate Katniss of the Hunger Games series. It would be nice if others had the chance to do so, as well.

One response to ““Ever Wonder?””